Described by the UNESCO Puerto Rican Association as a “refined composer, creative guitarist, and human being of great virtues,” HERMELINDO RUIZ has performed successfully in twelve countries and has been praised for his talent in music, as well as his creative personality and his enthusiasm. 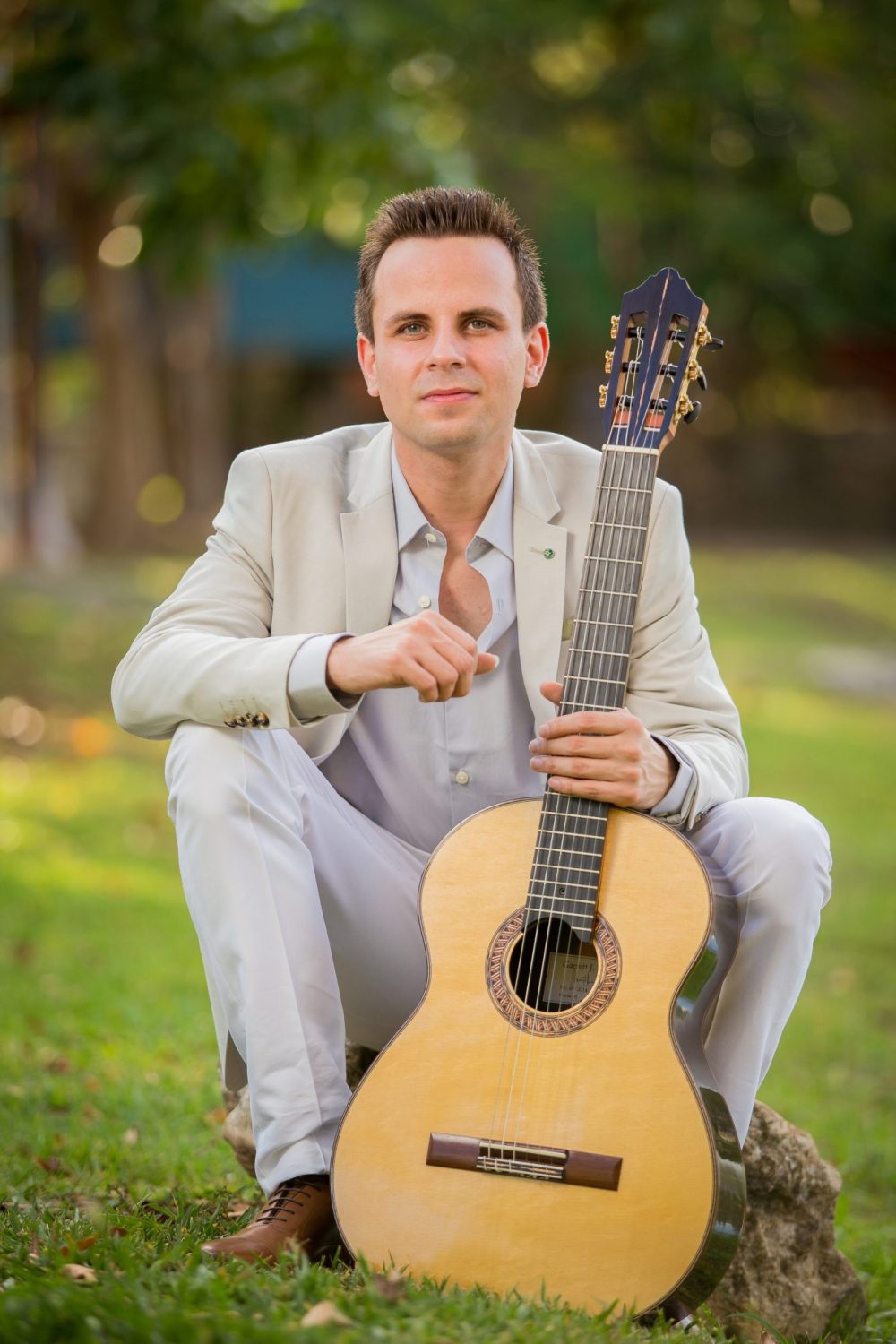 Hermelindo has been awarded by more than a dozen entities with awards such as the ‘Andrés Segovia’ (Compostela, Spain 2011) and the ‘Ángel Mislán Order’ (P.R. 2009). In addition, he has performed in places such as Carnegie Hall in New York, Festival Áureo Herrero in Spain, Las Américas Theater in Paraguay, Orvis Auditorium in Hawaii, Saint Church Hall in New Zealand, among others.

Hermelindo’s recording of the Puerto Rican dances of Juan F. Acosta was chosen as one of the best albums of 2014 in Puerto Rico. This project also included a book where he revealed unknown data about the more than 1,200 unpublished works by the composer.

An innate talent in composition led him to publish his first book, With the fingers between threads, at the age of 21. This included eight of his first compositions and was written to express wonder for the music of Puerto Rico. Since then, other interpreters have taken this music to countries such as France, Italy, Slovenia, Portugal, Zimbabwe, Thailand, China, and Russia. Recently, Hermelindo was invited to give concerts in Australia, completing the list of the main continents of the world where his compositions have been performed.

In March, Hermelindo presented two online demonstrations outlining the significance of Caribbean music in classical music composition (one session in Spanish and the other in English). The presentations provided an overview of the music and composers of various Latin American countries. Click here to watch the video from this demonstration on our Facebook page.

“Ojos de ensueño” is a work by Puerto Rican composer Juan F. Acosta. Puerto Rican native Hermelindo Ruiz has championed the music of Acosta, including this arrangement for guitar and string quartet. This project is the first of three collaborations with The Cleveland Orchestra for the 2021 Creative Fusion video series.

“To Soar Beyond” is an original composition by Hermelindo Ruiz for guitar and string quintet. It draws inspiration from the Puerto Rican Danza (one of the most important musical genres of Puerto Rico). This piece reflects the composer’s thoughts on how music can provide solace in difficult times, bringing hope for an end to the pandemic. This project is the last of three collaborations created in partnership with The Cleveland Orchestra for the Creative Fusion video series.

“Music for Interaction: Based on ‘En Mi Viejo San Juan’” was composed by Hermelindo Ruiz for students in the CCGS Education Program, celebrating the 500th anniversary of the founding of San Juan. This work features improvisation and storytelling, calling on both parents and students who moved from Puerto Rico to Cleveland to share their experiences. The score is based on “En Mi Viejo San Juan” by Puerto Rican composer Noel Estrada, an homage to the shared cultural roots of all of the performers.