This page includes media and links highlighting events in the Cleveland Classical Guitar Society’s programming and educational initiatives. We hope you’ll take time to browse through the selections. CCGS Alumnus Damian Goggans was interviewed in a story that aired on 2 NPR stations. He talks about some moving moments, like performing his own composition Ballad for a Mother at Severance Hall, with his mom in the audience.

“I like to think that it was kind of chosen for me,” Goggans said. “Once I found a guitar, or once guitar found me, I should say, I knew it was what I was supposed to do.”

Click here to listen to the whole interview on WKSU.

Fox 8 News – Voices of Unity: How music creates a bond

Wayne Dawson interviewed CCGS student Damian Goggans and Executive Director Erik Mann for “Voices of Unity” on Fox 8. It is a moving story of music and mentorship with a remarkable student.

Damian said “I feel like I’m plugged into the universe in a way [when playing guitar]. I feel at peace and I feel like I’m me… like I discovered who I am.” News 5 Cleveland discussed the significance of the Beyond Ferguson video project with CCGS students Damian Goggans and Kadirah McJunkins and Director of Education Brian Gaudino. The students talked about the personal impact of working on the project in the wake of George Floyd’s death.

This interview was included in News 5 Cleveland’s Conversations on Race: Moving Forward. WCPN 90.3 FM – The Sound of Ideas: Beyond Ferguson

Drew Maziasz (The Sound of Ideas) explores how CCGS students express themselves through music as they address current social unrest. Guests include Brian Gaudino (CCGS Director of Education), Thomas Flippin (composer of Beyond Ferguson), and Alana Colvin (CCGS alum).

Students and administrators from Luis Muñoz Marin Dual Language Academy discuss the positive impact that CCGS Education has made on students’ lives in this video produced by the Cleveland Metropolitan School District. This story won a regional Emmy, from the Lower Great Lakes Regional Emmy Awards.

Through their Arts Mastery initiative, the Cleveland Foundation recognizes the need for students in Cleveland to have access to meaningful arts education that goes beyond an introductory level. In this video, students, teachers, and school administrators discuss the impact of CCGS Education Program.

News 5 Cleveland paid a visit to the Lexington Bell Community Center in July 2019 to see the work CCGS is doing with the students. This project features a collaboration with local hip-hop artist Archie Green and CCGS teacher Andy Poxon. Archie and Andy have been fusing hip-hop and classical guitar in a class that gets kids engaged and excited!

CCGS partnered with Center for Arts-­Inspired Learning to present summer ArtWorks, a program which high school students are paid to study their art form and develop career skills. One product of this program was a beautiful, uplifting composition called Brighter Days. 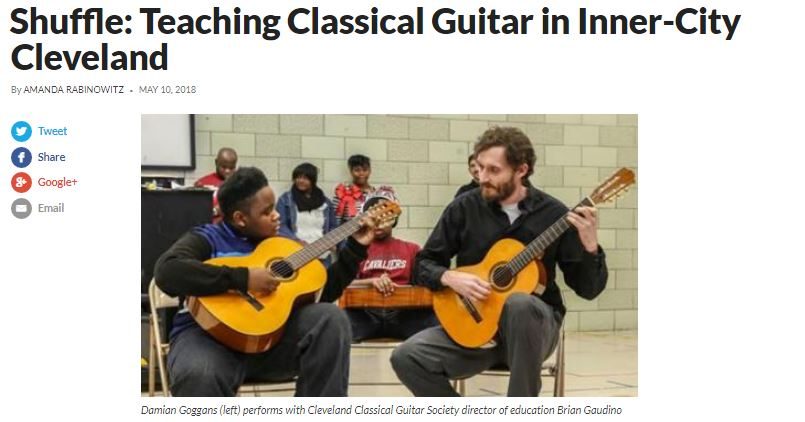 “A non-profit arts organization is turning inner-city Cleveland kids into classical guitarists. It’s a growing outreach program started by the Cleveland Classical Guitar Society, that began working in the schools about six years ago. This past spring, they got a Cleveland Foundation grant to expand to an after-school program in the Clark Fulton neighborhood.”

Click here to listen to the feature which aired on WKSU 89.7 FM

Prior to joining CCGS’s program, Damian Goggans had never had the opportunity to formally study an instrument. Damian’s many concerts in recent years include this performance with Les Frères Méduses on the International Series in 2018: 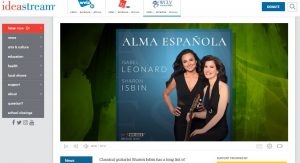 CCGS presented classical guitarist Sharon Isbin in her Cleveland debut in February 2018. Prior to the concert she stopped by IdeaStream to chat with WCLV Classical 104.9 host Angela Mitchell. They were joined by local guitarist Colin Davin, a former student of Isbin.

Click here to listen to the feature which aired on WCLV 104.9 FM

The Deeper Meaning of Learning Music

Martez Price, a former student of CCGS Education, talks about his experiences in the program. While a student, Martez became the first Junior Teacher, a position that allowed him to gain teaching experience working in collaboration with CCGS and Boys and Girls Clubs of Cleveland. After graduating from high school, Martez spent a year working as an assistant teacher for the CCGS Education Program.